A&D’s LCCU-21 USB subminiature button load cells are available in capacities ranging from 100 N to 1 kN. Their tiny size makes it easy to incorporate them into your own machinery or test equipment. They are connected to an A/D converter with a USB interface, enabling you to quickly build PC-based force measurement and data acquisition systems at a very affordable price.

As an alternative to A&D’s free WinCT-DLC application, you can also use these load cells with the most recent release of our Simple Data Logger software (SDL v1.2.1). In this article, I’ll show you how to configure SDL to request data from the load cell in user-defined intervals (polling).

The LCCU-21 button load cell has two data transfer modes: continuous transfer of up to 100 values/s and a command/reply mode. Currently, only the second mode is supported by Simple Data Logger (continuous mode has to be started and stopped by sending special commands to the LCCU-21, which is something that will be available in a future version of SDL).

2. Go to the license tab and enter a license key (required for the polling function). You can purchase license keys from FastSpring through a completely automated process (including a “90 days” license for only US$5). You can also contact us if you require a free trial license or apply to become a reseller if you want to sell our software to your customers.

3. In the input tab, set the device to “A&D LCCU21”, then click on set default parameters for device. This will set all interface parameters for you. The only thing left to set is the (virtual) COM port which appeared on your PC after connecting the LCCU-21 to a USB port (see this PDF document for further information):

5. Switch to the control tab, enable polling and set the timer to a value that makes sense for your application. Click on set default command for A&D LCCU21; this will automatically enter the “RLMV” command which will be sent to the USB button load to request measurement data:

6. Select a file in the output tab. Click on the set values button to automatically set the values below for your region so that you can easily open the CSV file in Excel later. If you want to record the time with milliseconds, choose the appropriate format from the drop down list or enter it manually: 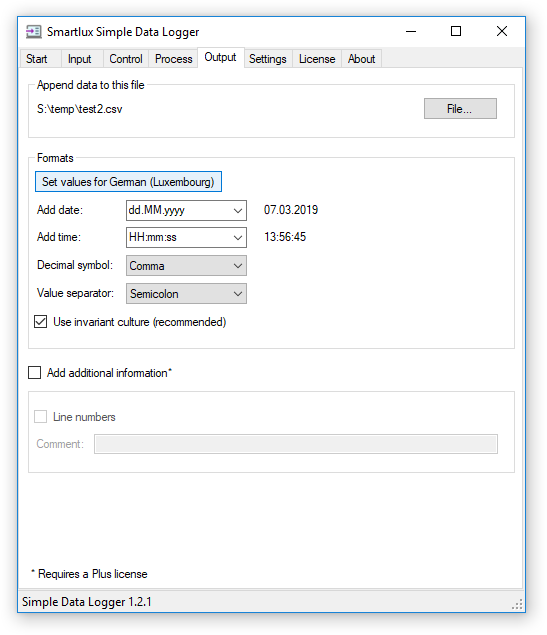 7. Click on the start button in the start tab to connect to the LCCU-21 USB button load cell and to start sending the polling command. Commands and replies are shown in the event log. Captured measurement values appear in blue and are written to the CSV file. Click on stop to stop data acquisition and to close the file:

“Simplifying even the most complex industrial applications” is the claim that Ohaus makes in their data sheet. Is it justified? After spending some time trying out the different functions of this scale, I believe that yes, it is.

The key to understanding the power of the Ohaus Ranger 7000 scales are the 10 application modes:

Each application is displayed differently on the 4.3 inch color screen. Compare, for instance, the display in weighing mode to check counting mode:

The applications are not limited to different presentations:

Therefore, as long as your application is supported by the scale, it does an excellent job at simplifying many tasks.

The first scale with a touchscreen display that I ever used (not made by Ohaus) took a while to start up, reacted sluggishly and – if I remember this correctly – required me to set up a user account before it would let me actually use it. That was a few years ago, but still, I was a bit skeptical when Ohaus announced that the newest model in their legendary Scout series would now have a touchscreen, too. However, after purchasing the cheapest Scout STX (the STX 421) and testing it extensively over several weeks, I can say that my worries were unfounded.

As you can see in this short video, the Scout STX is even faster than the Ohaus Ranger 3000:

How many scales can truly claim to be so easy to set up that you never have to look at the manual? As an example, here’s how you change the language: Touch “Menu”, then you’ll see 8 settings, of which “Balance Setup” looks the most promising. You’ll now see another seven settings with “Language” being the first one:

Should you ever find yourself somewhere you didn’t want to go, you can simply touch “Back” to go back to the previous screen.

Somewhat embarrassingly, the only thing I actually had to look up was how to change into another application mode: Instead of going through the menu, you simply touch the application name shown in the top left corner of the screen.

The touchscreen really shines when it comes to different applications. As you can see in this video of me using the parts counting mode with auto-optimization, the STX can even replace a dedicated counting scale:

12 seconds into the video, you can see that the scale displays a numpad to let me enter the average piece weight or number of samples. There’s simply no way to achieve this kind of application flexibility and user friendliness without a touchscreen.

One common complaint about touchscreens is the lack of tactile feedback. Fortunately, the most frequently used buttons on any scale, ON/OFF/Zero and Tare, were still kept as physical buttons on the Ohaus Scout STX.

You also have to consider that the fairly large screen needs a lot of power. The Scout STX can be used with four AA batteries, but those won’t last more than a few hours (6 according to Ohaus). It’s certainly a good idea to use the included power adapter whenever possible.