Making an electronic hive scale can be harder than you think

Hive scales for use by beekeepers are a niche market; moreover, they must meet a number of special requirements, such as:

It is therefore unsurprising that no major scale manufacturer offers a hive scale and that commercially available scales from specialized manufacturers can be quite expensive.

The following list contains all beehive scales available in Europe that we currently know of (both commercial and open source / DIY projects). Websites with descriptions in English and with recent updates were highlighted:

We would be happy to receive links to other products and projects in the comments. 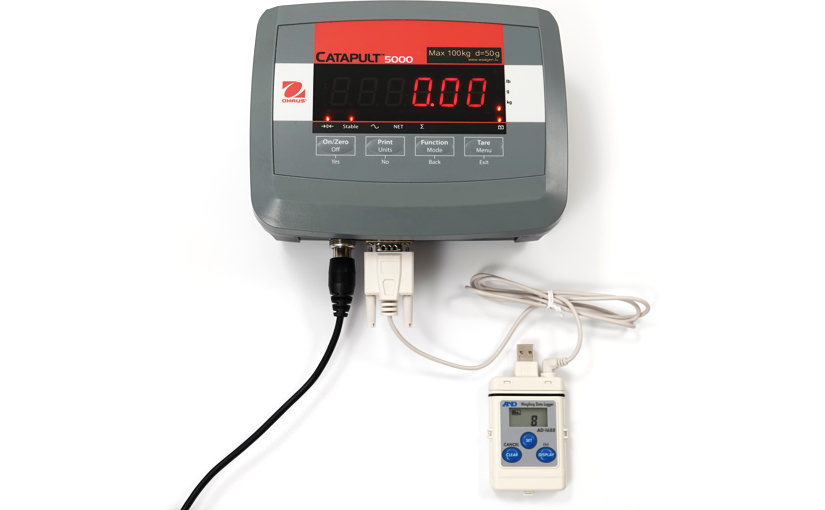 It is a compact device designed to be connected to scales and balances made by A&D via their RS-232 interface. It stores the weight and – if required – a sequential number and the date/time. After weighing, it is connected to a USB port on a computer (just like a flash drive) to access the data: 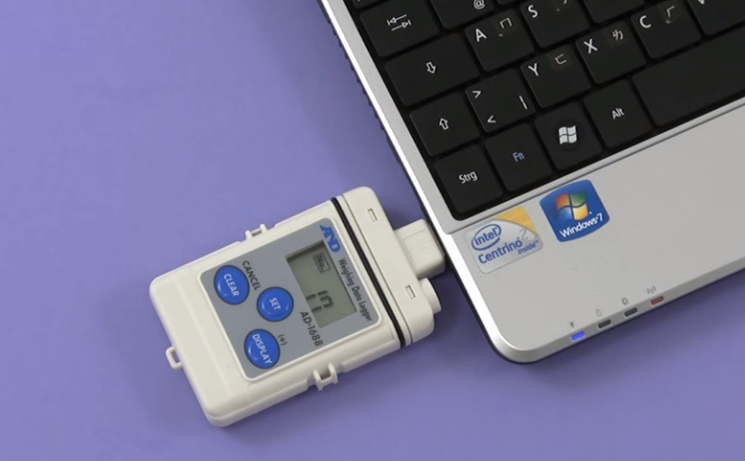 The CSV file created by the AD-1688 can be opened in applications such as Excel by simply double-clicking on it. The weight will appear as a number in its own column, ready for further processing.

Does the data logger work with scales from other manufacturers?

Sometimes, but it almost never works as well as with scales from A&D. In our tests, the following problems occurred.

The data logger comes with suitable cables for (almost) all scales and balances made by A&D. On a DE9 connector (often erroneously called DB9), it uses pins 2 (RxD), 5 (GND) and 6 (DSR), though the latter is not strictly necessary. To connect to scales from other manufacturers, you may need adapters such as “gender changers” or null modem adapters, or you may need to make a special cable:

Please do not assume that the pinout is compatible just because the connector can be plugged in on your scale!

Some scales use pins of the RS-232 port for other purposes, e.g. for powering peripherals such as check weighing signal lights. These pins must not be connected to the AD-1688!

Power supply via the RS-232 interface

The AD-1688 gets its power from the scale it is connected to (or the USB port when connected to a computer). RS-232 voltage levels are clearly defined in the RS-232 standard. Nevertheless, the “RS-232” interface of some scales does not supply the voltage required to operate the AD-1688. On a Kern DE parcel scale, for example, the data logger did not turn on at all, even though the pinout matched:

Further analysis revealed that this scale did not contain an RS-232 transceiver and that logic one (“mark”) was sent as 0 V (instead of −15 to −3 V).

The settings for baud rate, number of data bits and parity must match on the scale and on the data logger, otherwise the AD-1688 won’t be able to read the incoming data correctly.

When using the data logger with scales from A&D, you do not have to worry about this: Almost all A&D weighing instruments use 2400 bps, 7 data bits, parity “even”. This is also the default setting of the AD-1688.

For scales made by other manufacturers you will have to change the interface parameters either on the scale or on the data logger. The AD-1688 supports the following settings:

The data logger expects all data to be sent as ASCII in A&D’s standard format:

Only a very small number of scales made by other manufacturers support this exact format. If your scale sends data in a different format, two problems may occur:

You can try this out yourself by right-clicking here and downloading a (renamed) file we recorded on an AD-1688 connected to an Ohaus Catapult 5000 scale. This is the scale shown in the header image of this article.

Many scales send several line breaks after the weight (for the paper feed of a serial printer). This causes the data logger to create empty rows not containing any data. If you cannot modify the line feed configuration of your scale, you can instead increase the “Line” setting of the AD-1688 to combine several lines into one row.

This will result in empty columns (see example file above), which is much better than empty rows. However, the maximum is 7 lines. Beyond that, data will spill into the next row.

The AD-1688 data logger cannot convert between a decimal point and comma. If you’re in a country which uses a decimal comma, this again means that you will have to use the import wizard of your spreadsheet app to correctly format the weight as a number.

Note: A&D scales let you choose whether the weight should be sent with a point or comma (e.g. “12.34″ or “12,34″) and therefore do not have this problem. You only have to ensure that the “dP” setting on the data logger matches the decimal separator used by your scale.

Most scales have a “print” or “data” button to send a single weight reading to a connected device. However, this is not always the case. Some scales send the weight continuously with several values per second. This would quickly fill the memory of the AD-1688. You can mitigate this by using the “Rec” setting so that data is only stored at certain intervals, but this is far from ideal for most applications.

Other scales use bi-directional protocols (very common with point-of-sale scales):

Such scales can definitely not be used with the AD-1688 weighing data logger as it can only passively record incoming data. It is unable to send requests to the connected scale (see pinout above, there is no transmit pin).

Intended use according to A&D

Finally, the manual (PDF) clearly states that the AD-1688 is designed to be connected to “balances and scales with an RS-232C connector manufactured by A&D“. It was never intended to be used with weighing instruments made by other manufacturers. Given the many pitfalls described here, this is an understandable decision.

The trouble-free operation of the AD-1688 weighing data logger is only guaranteed with compatible scales from A&D.

On scales from other manufacturers, the AD-1688 may work, but there are many potential problems that can cost you a lot of time. Even in the best case, the resulting CSV file will often not be fully comma-separated due to differences in the data format and will require further processing.

If your scale is not made by A&D, consider connecting it to a PC for data acquisition. You can use our Simple Data Logger software, which is designed to work with scales from many different manufacturers.

Note: The information in this article is valid for firmware P1.10 of the AD-1688.

Links and further information about the AD-1688 weighing data logger 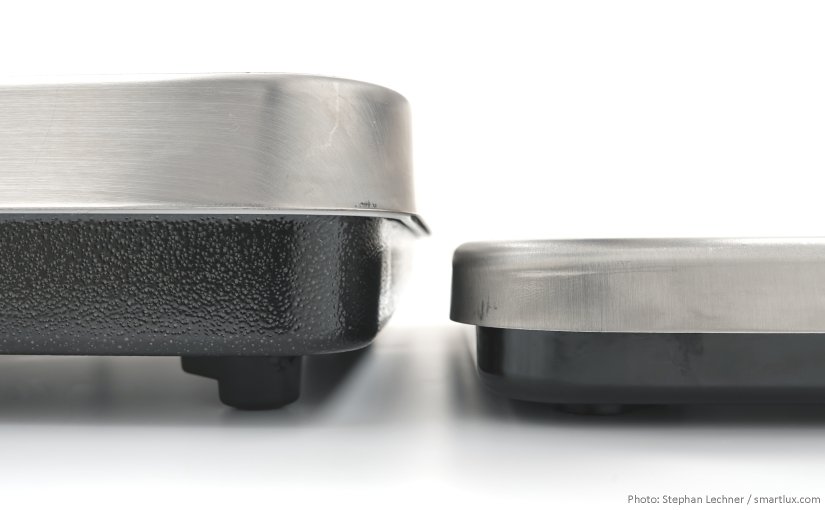 This article is based on an actual question asked by a potential customer*:

In the technical data of the Kern DE scale the dimensions are given as follows: 318 x 308 x 75 mm. I would like to know how high the scale is when it is standing on a straight surface, i.e. whether anything needs to be added to the 75 mm height.

Although I was not quite sure what the last sentence meant, I took the opportunity to confirm the height of the base of this scale. The Kern DE 60K10D I measured was around 77 mm high: 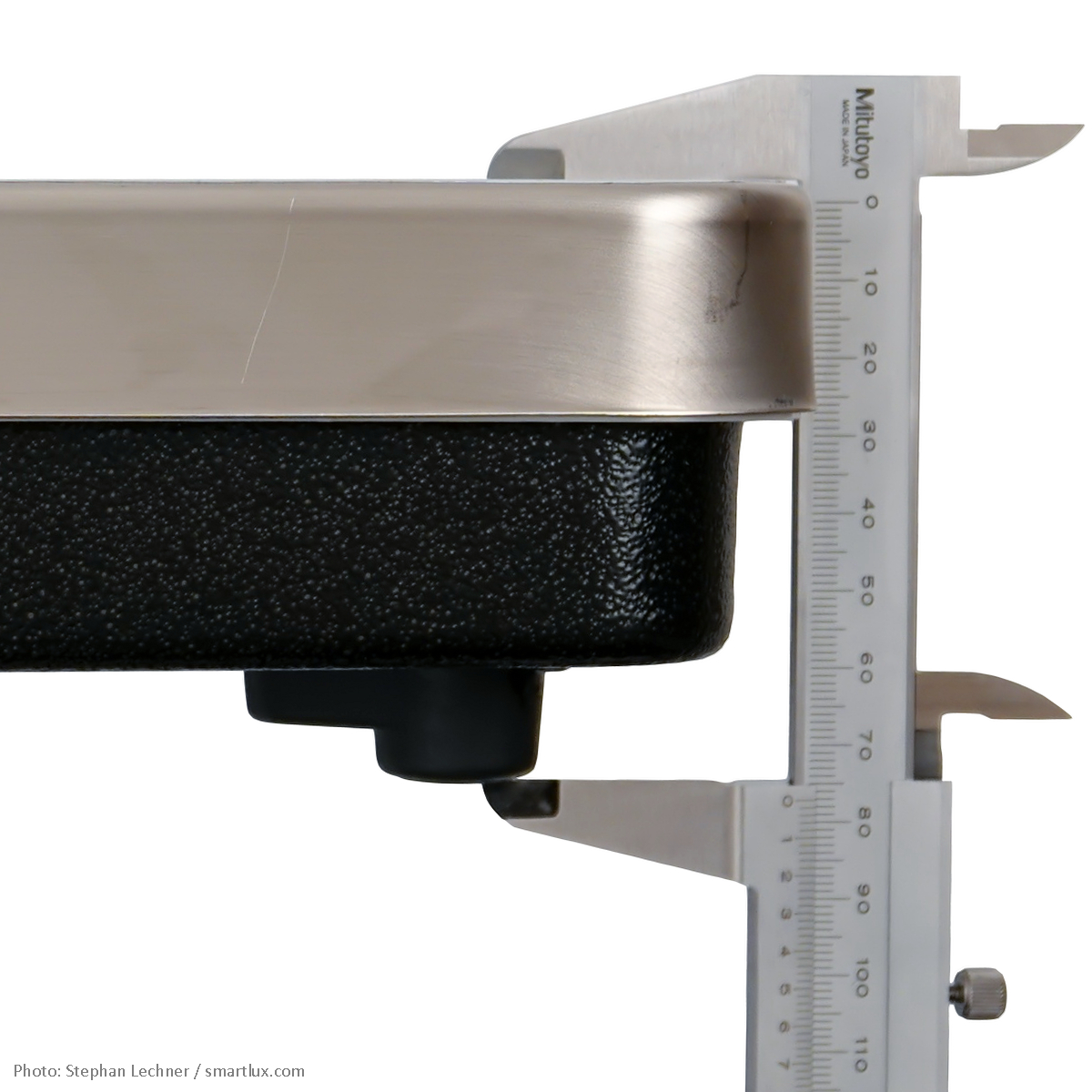 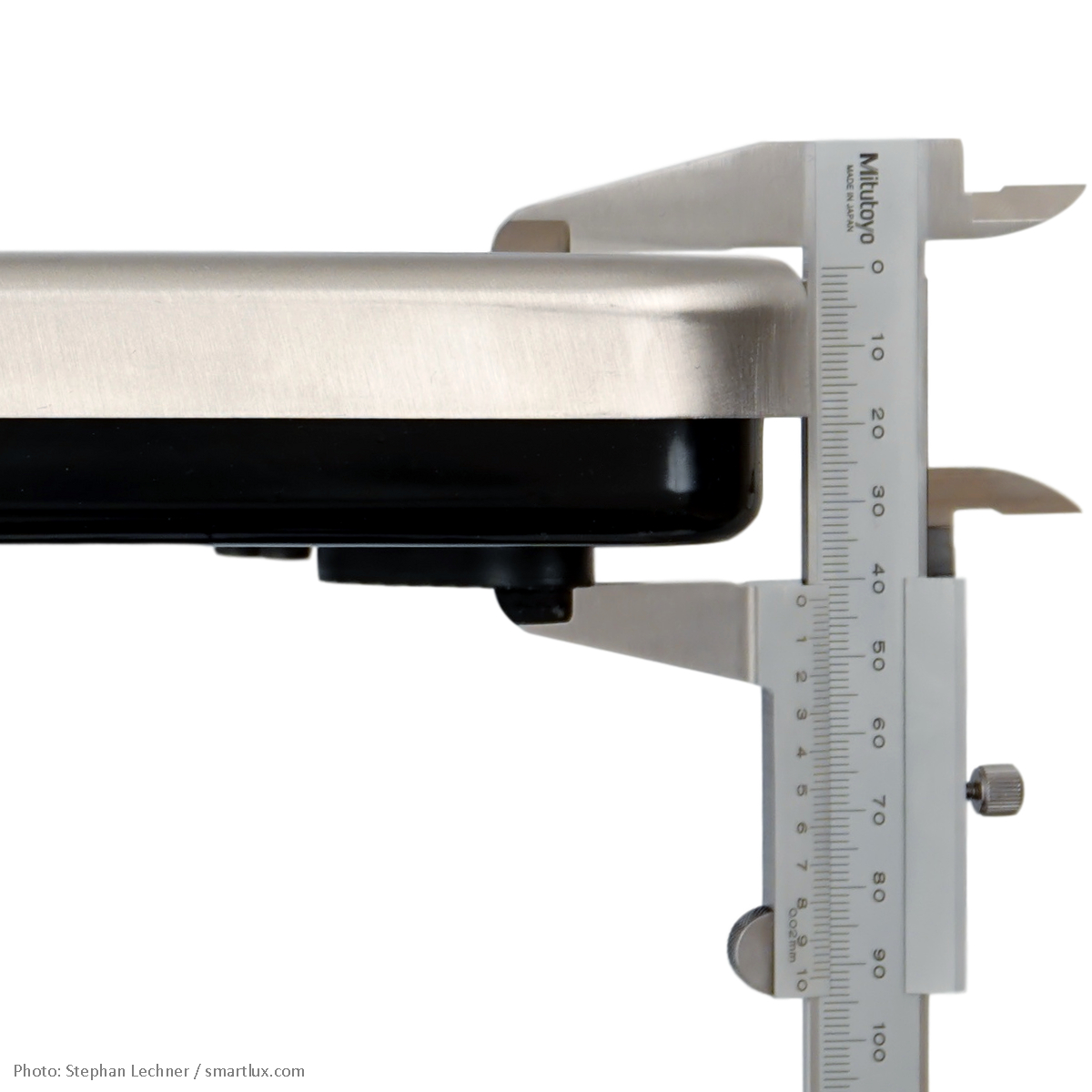 While the base of the R-series Ohaus Catapult 5000 models is super slim, please note that the indicator is relatively bulky and that the stainless steel platform is not removable:

Another option would be the simpler Ohaus SD scales, which are also around 42 mm high (most compact models).

Thin scales can be advantageous if you plan to integrate them into a packing table (or other type of furniture), but keep in mind that they may not be as robust and serviceable as larger platform scales.

Links to the manufacturers’ websites:

* I mentioned this so you don’t think I’m getting bored during the lockdown and just going around and measuring things.